So for the past two Summers, I have been ridiculously lucky to somehow have a bin of toys almost drop into my lap. And every year I try to chronicle the contents of the bin over the course of several blog posts, (Part 5 of the FIRST bin can be found here, with links to the previous 4 entries, detailing the rest of the bin... and Part 3 of the SECOND bin with links, etc, etc) with limited success... And both of those Bins Full of Awesome came from the same neighborhood guy who sold them to me.


This summer I was lucky once again to receive a Bin of Awesome... but this time from a very unexpected source: CANADA.


Yes... you read that right... CANADA. I have a podcasting friend, Chris Gaida, from my days on Geek Fallout, who I THOUGHT I was trading just a handful of comic books with. I sent him a small parcel of comic books and a couple of months later... this thing lands on my doorstep. From CANADA. Thus, saving me from a Bin-of-Awesome-Less Summer! Let's rip the lid off this sucker and see what was inside it shall we? (Oh, and FYI, I'm going to cover everything in this one post and skip the multi-part nonsense because the Halloween season is drawing near, and I'm limited in the number of posts I can crank out between now and September 30th. So you get it all one-and-done, baby!) 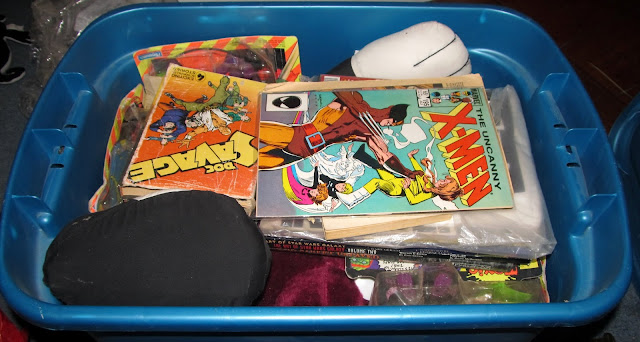 Right after wrenching off the lid, a gust of cold, Canadian wind puffed out in my face, temporarily blinding me. But then I was greeted by the sight above. Goodies!!!  I'll reveal the layers of the bin as they were revealed to me. I had my camera in hand as I went through everything, so you are seeing pictures of the first moments I laid eyes on everything in the bin myself.

So, without further ado, let us dig in! 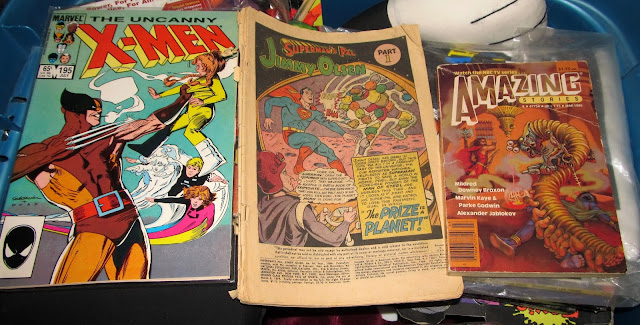 On the topmost layer, I was greeted by a crossover issue of the X-Men, featuring Power Pack (more on "The Pack" a bit later) an issue of "Superman's Pal Jimmy Olsen" AND an issue of Amazing Stories ("Watch the NBC TV Series...") this is all EXACTLY up my alley so far... Let's keep on digging. 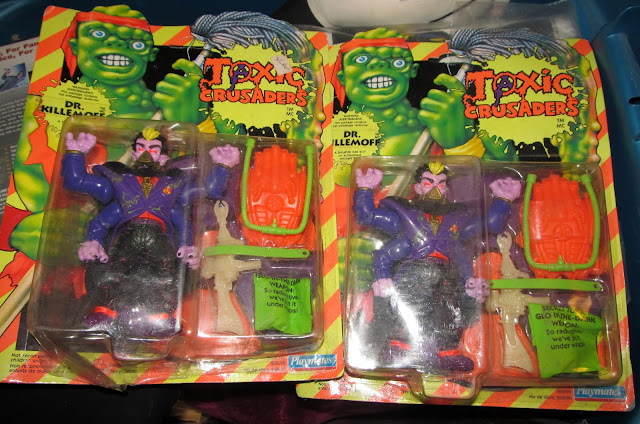 This was... unexpected... to say the very least. Not ONE... but TWO carded Dr. Killemoffs from the Toxic Crusaders action figure line. These were put out by Playmates back in 1991 and they were a very close rival to the TMNT in my heart. I was actually collecting these when I was 12 going on 13... so I was growing long in the tooth for action figures... but damned if I cared! One of these Doctors' blisters was separating from the card back so I shucked him and have since placed him proudly on my shelf! Dr. Killemoff was a high-ranking general in Hordak's army. 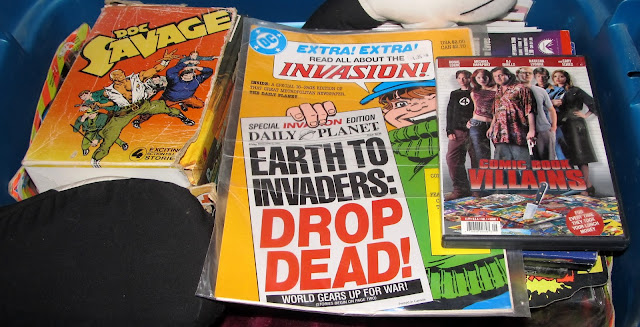 Aaaaaand theeeeen... A boxed set of the first four books in the Doc Savage novels set!!! This was one of my favorite items in the bin! I SHOULD have photographed the individual book covers because they are all AMAZING... but I'll feature them sometime in the future. There was also a news paper/magazine thing from the "Invasion" DC event, and a DVD of "Comic Book Villains" which I have never heard of but CANNOT WAIT to watch (Well, I actually can and will wait to watch it because all my spare viewing time is currently devoted to watching horror films for my October Countdown... But come... Novem... Decem... maybe January? I'll be popping this bad boy in right away!!!) 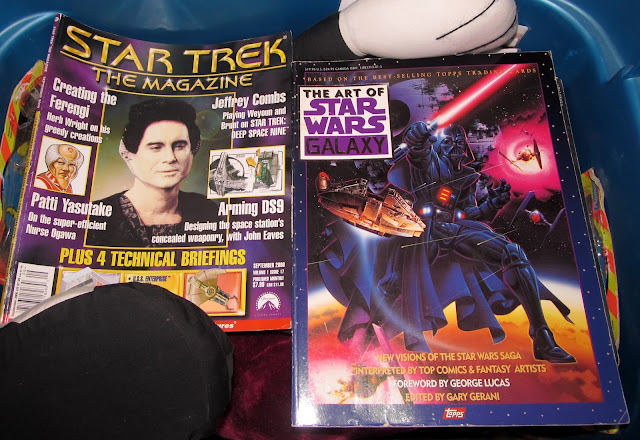 Chris also included this copy of "Star Trek: The Magazine" which features Jeffrey Combs! Chris knows I love me some Combs! Then I saw this "The Art of Star Wars Galaxy" book, which collects the art from the TOPPS trading cards. Oh man I LOOOVE me some Star Wars, and a lot of the artowork from those cards was ridiculously kick-ass. 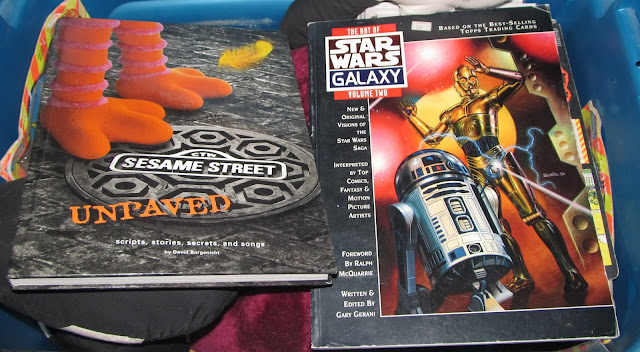 So of course he included volume 2 as well! Chris proves several times throughout this bin that he's the kind of guy who pays attention to detail. He tailor suited this stuff to me PERFECTLY (which was the point, I know, duh... but it bears pointing out!) case in point being "Sesame Street Unpaved" which is an incredible behind-the-scenes book detailing one of my all-time favorite kids' shows. I've only had the opportunity to kind of flip through these books so far, but I'm planning a Sesame Street blog event for the future, and this book is just PERFECT. 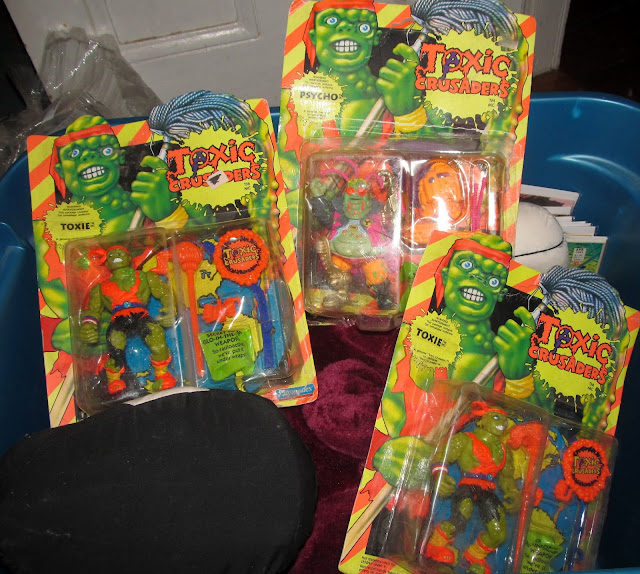 MORE TOXIC CRUSADER ACTION FIGURES!!! This time around we get two of our verdantly virile hero, Toxie! and Dr. Killemoff's Major Domo, Psycho! I left one Toxie on his card and shucked both Psycho and one of the Toxies so they could join Killemoff on the shelf. It felt kind of wrong but it also felt kind of right. I just love playing with toys so much, I couldn't leave them trapped. Now I only have 4 or 5 more of these guys to track down before I have a complete set! But once those action figures were cleared out of the way... the most amazing thing was revealed unto mine eyes: 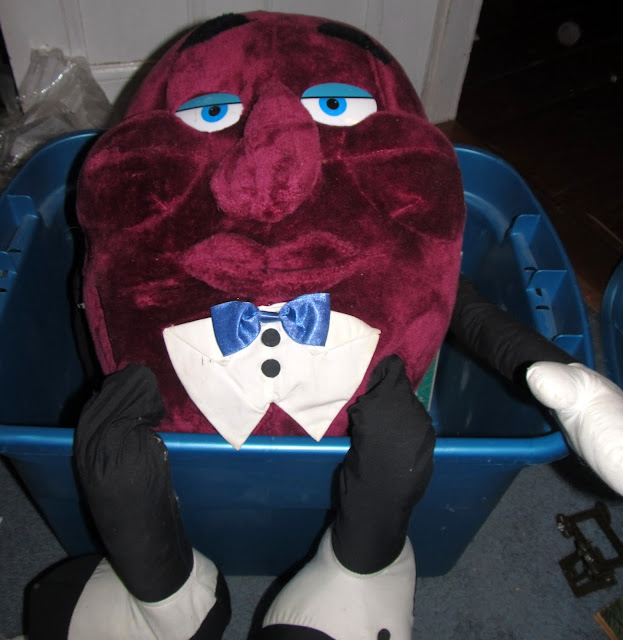 THIS THING. There have been hints as we've been digging all along. His purple body, his gloved hand... his.. be-spatted foot... all pointing to a California Raisin! But oh what a colossal Raisin it is!!! This thing is a monster! This is obviously one of those huge fair prizes that are almost impossible to win. Weird thing is... I think I remember these kinds of toys hanging from the ceilings of the dart games and whatnot at our own local Blue Hill Fair from when I was a kid! For those of you that don't know, the Raisins were a BIG DEAL for a few years back in the 80's. They were EVERYWHERE. SO it's no wonder that there would be questionably-licensed versions of the characters being given out as fair prizes back then. Good GAWD this thing is beautiful. And ridiculous-big. I have no idea where I will be displaying him, but its been mostly wherever he's least in the way for the time being. 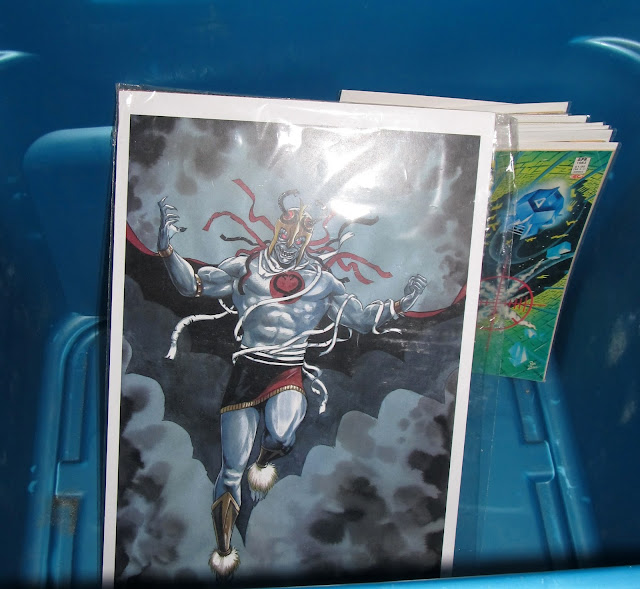 But wait! We're still not done! The bin of awesome has yet deeper... depths... to plume! There was this gorgeous art print/poster of Mumm-Ra, the Ever-Living! The glare on the protective plastic sheath definitely steals some of the impact, but I assure you this thing is awesome. 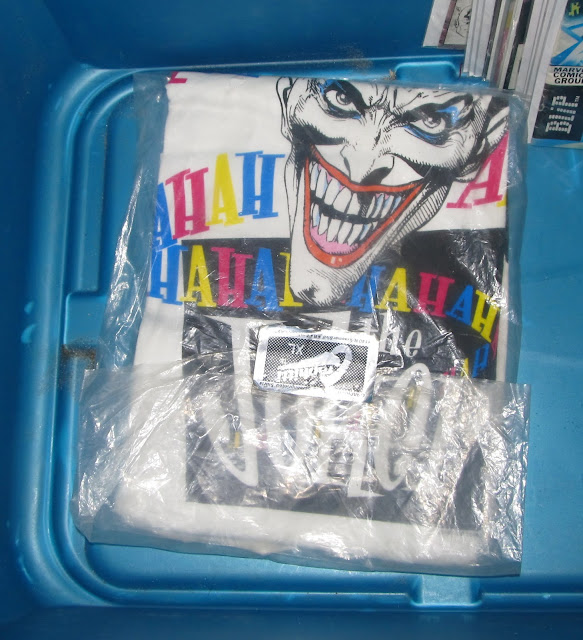 Also included was this awesome Joker t-shirt! Is it worth anything? I don't know! I yoinked it out of the plastic and started wearing it the next day! I feel like I'm a terrible collector sometimes... but when somebody gives me a Joker shirt I wear that s**t. 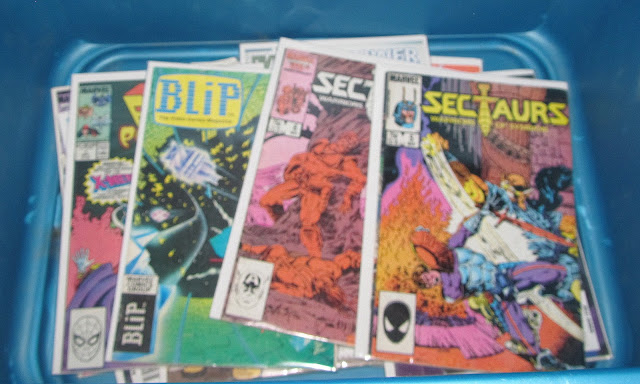 Ugh I didn't realize how blurry this photo came out when I took it... but I DID realize I was too lazy to go tracking these back down to re-photograph them, so you get what you get. "Power Pachyderms!" "Blip!" And two... count them TWO issues of "Sectaurs!!!" Because Sectaurs KICK ASS. 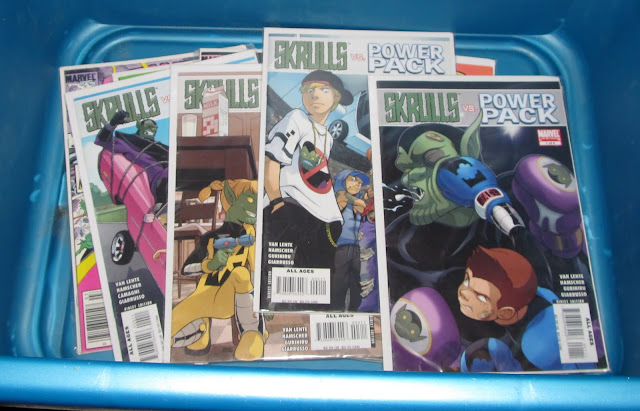 Sooo... now we're getting into the Power Pack neighborhood. I. LOVE. POWER. PACK. These issues here, "Skrulls vs Power Pack," are from a relatively recent mini-series put out around the "Secret Invasion" event back in 2008. I say relatively because the original Power Pack series was put out back in the mid-to-late 80's and early 90's. It had a bit of a renaissance under the "All Ages" series of books Marvel did from 2005 to 2010, in fact this one was the 8th miniseries out of 11. These are not really part of the mainline continuity of the Marvel Universe (like that even matters anymore), but they're still an excellent read. But honestly, they pale in comparison to... 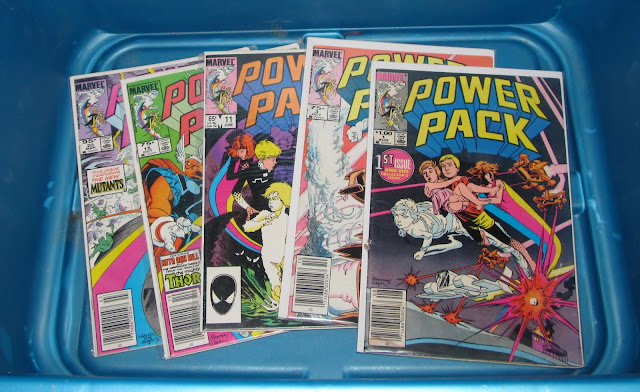 Original Power Pack!!! Chris is actively trying to help me complete my original run of Power Pack. And thanks to this handful of comics (Including #1!!!) I'm finally down to the last 8 issues I need to have them all! This was such an incredibly AWESOME package to have received! Chris Gaida's generosity was ridiculous here, and I really can't thank him enough. I can only say that I owe him MAJORLY and I will do my best in the future to repay the gesture. 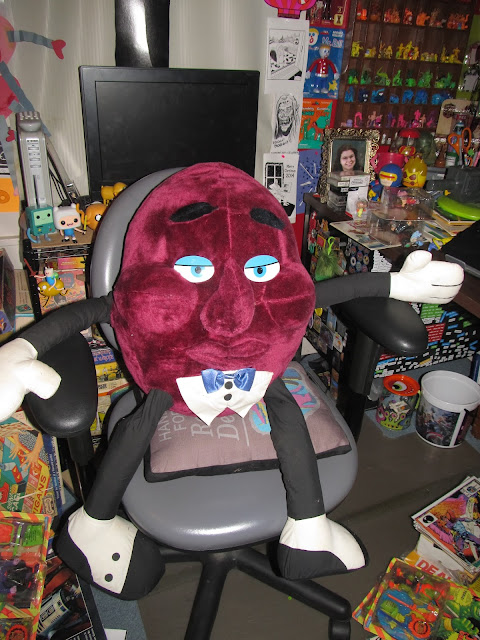 Well, that's it for tonight kids! I want to thank Chris Gaida one more time for being such an awesome friend and sending me my Summer of 2015 BIN OF AWESOME!!! Be sure to listen to him and some of my other good old podcasting friends over at Geek Fallout (They are also on iTunes so be sure to subscribe and leave them a review)! You can also follow Chris on Twitter. As per usual, I'll be back very soon with some Geeky Goodwill Goodies, so until then, Happy Hunting! (Only 19 more days until October Eve!!!)
Posted by Derek Ash at 5:47 PM