I made a quick stop in at Goodwill last week and found a handful of cool stuff to bring home: 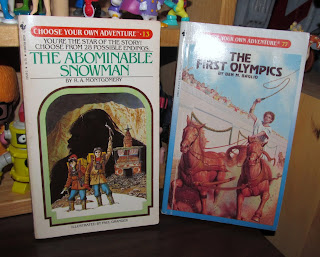 A couple of Choose Your Own Adventure books: The Abominable Snowman #13, from 1982, and The First Olmpics, #77 from 1988. I've gone on in great detail about my love for these books before here on the blog, so I won't go nuts now... but these were a great find for .99 cents apiece. 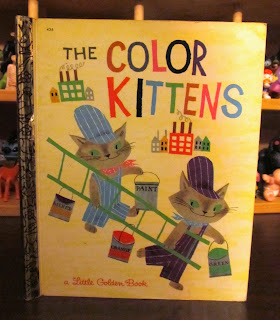 I'm really trying hard to figure out when this copy of Color Kittens was published. It's definitely not the first printing or anything... But I think it's no more recent than the mid-to-early 70's. I plan on doing a post somewhere in the future to just feature the LGB's in my collection. Love these things. .99 cents. 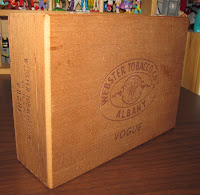 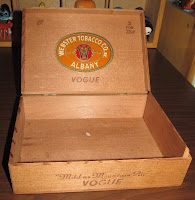 Picked up this old cigar box for .99 cents as well. There are few things that excite me more than finding old cigar boxes. I can't tell if this is just a repro of an older box or what... but I will be hiding SO many treasures in this thing. 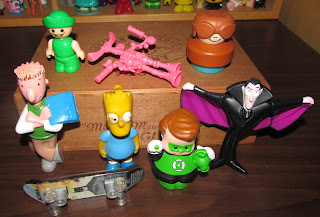 The real stars of this Quick-Stop were the contents of the grab-bag I found for .99 cents. This was an uncommonly cheap grab-bag, as one with this many items would normally have been at least 1.99. I felt truly blessed. 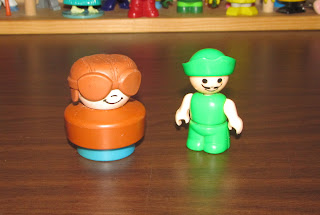 First up there were these guys. One of them is a 1990 Little People sea-plane pilot. Typically I do not collect the less-chocking-hazardous "chunky" Little People... but this guy was just such a charmer... I mean, look at that pilot's cap and goggles! I have no idea what toy line the little Robin Hood guy came from, but it seems SUPER familiar, like I've seen or owned similar toys from the same line when I was a kid or something. Either way he feels like an attempt to cash in on the Little People popularity, and I like knock-off toys if they're done right. 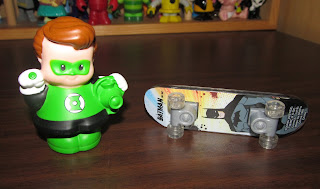 From the DC universe, there was this Green Lantern Little People figure. I am not even a little bit of a fan of the new-style little people... but GL??? Gotta have it. I've also seen Wonder Woman's invisible jet out and about a couple of times and want to own it just for the weirdness factor. There's also a Young Justice finger board from McDonalds featuring Batman... who is not a member of Young Justice..? Right? 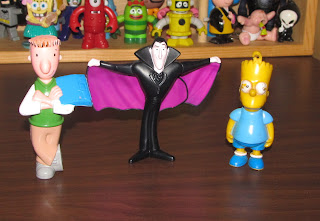 Here's a Doug Funny figure/pen that is actually from the 1999 movie, not the much superior 1991 TV series, but I'll take what I can get.  I miss the days of Rugrats, Rocko's Modern Life, Ren & Stimpy, and Doug. There's also a Dracula from last year's Hotel Transylvania for my Monsters display, and a horribly beat up Bart Simpson keychain from 1990. 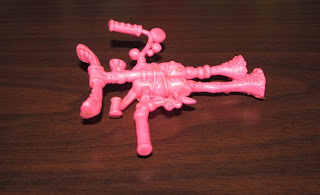 Finally, the main reason I actually picked up this grab-bag was for this. Head-Banger's weapon from the Toxic Crusaders toy line. I spent the next fifteen minutes after discovering this looking high and low for any other traces of Toxic Crusaders toys... to no avail. But I now own this.

That's it for today guys, but I'll be back soon with some more Geeky Goodwill Goodies! Until then, Happy Hunting!!!
Posted by Derek Ash at 11:07 AM