Last Friday was payday for me at work. As regular readers of the blog may already know, I try to make it to Goodwill every Payday Friday. It usually turns into a pretty intensive visit, lasting sometimes well over an hour or two. This is because instead of quickly scanning the toy section and book section, I search more in-depth, and I comb every section of the store for Geek-tastic items. The last couple of visits were a bit of a let-down, and I still have yet to make another epic find like the bag of vintage Masters of the Universe figures... but this payday Friday wasn't a total dry-hump either.

First I'll get the Little Golden Books out of the way. Almost every single one of these books is older than me or from the early 80's. I was able to get all of the old price tags you see in the picture off without any damage. These were all .99 cents apiece. 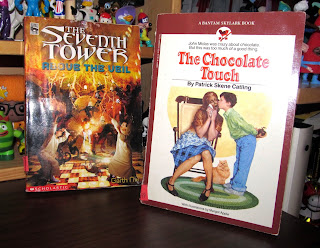 To wrap up the books I also picked up the fourth book in Garth Nix's Seventh Tower series: Above the Veil. Plus The Chocolate Touch which is the cover I remember from when I was a kid. Loved it back then, might try reading it to my sons to see what they think of it when they're a little older.

BONUS! Found this bookmark inside The Chocolate Touch. I've mentioned before how much I like finding little personal touches in the books and things I buy at Goodwill. This was a nice surprise. 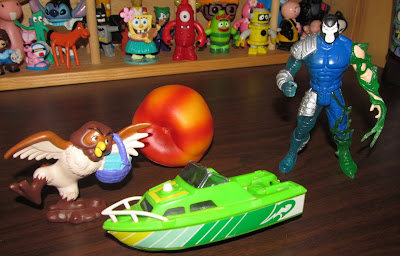 Moving on from the books to toys... I picked up a grab-bag containing these 4 items for just .99 cents. I did NOT buy it for the Owl figurine or the plastic peach. They will be returning to Goodwill. Nope, I actually bought it for the action figure. There was however an unexpected surprise: 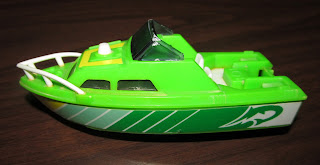 This green plastic boat is a TOMY toy from 1978. It is as old as I am. Once upon a time it had a wind-up outboard motor on the back, but I don't mind that it's missing. Check out that kick-ass swordfish decal on the side! 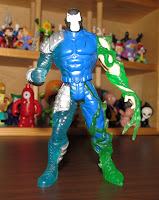 Meet Bane. Not Bane from the Dark Knight Rises of last year... but the Bane from the 1996 Batman & Robin movie. For such a crappy movie version of the character, the figure kind of rocks. And if Google is any indicator, it's pretty hard to find this toy anywhere. He's not the standard version of the figure, but instead came in a Brains vs. Brawn 2-pack with a Batman figure. This version of the character looks like he's had extensive work done on him by both Poison Ivy AND Mr. Freeze, if the translucent limbs on both sides of his body are any indicator. He's all icy translucent blue and silver on his right side, and vine-y translucent green on his left. There's a part of me that LOVES this guy... and I couldn't begin to tell you why. 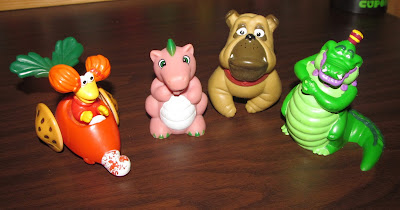 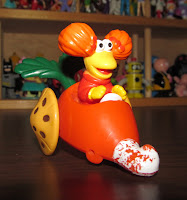 First up we have Red the Fraggle in a Radish car. McDonalds did this series of Fraggle cars back in '88. 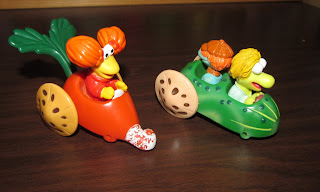 She goes great with the Wembley and Boober car that I talked about back in September. I've never been as much of a Fraggle Rock fan as I was the Muppets or Sesame Street, but I still love them as a Henson creation. 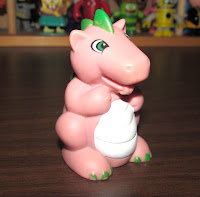 A Spike the Dragon from the vintage My Little Pony line. This is going in my wife's craft room with the other vintage MLP's I've managed to dig up for her in my travels. Having a hard time pinning down exactly when this particular version was produced, as the eyes are wrong for him to be the original version. 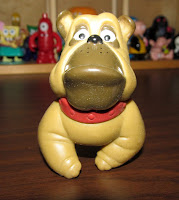 This is Francis the Bulldog from 1988's Oliver and Company. It is also a McDonalds Happy Meal finger-puppet for children with fingers as thin as knitting needles. He's cute, but not anything I really care about. He's probably going to get turned into another Christmas ornament for my wife because she loves the movie, but does not love having a ton of old toys (other than MLPs) cluttering up her craft room. 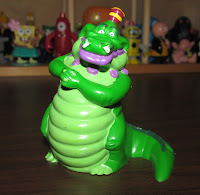 This is probably the most intensely exciting toy in the grab-bag, even considering how excited I was about the Fraggle car. This is an All Dogs Go to Heaven toy!!! This is King Gator, the Alligator that sings a duet with Charlie in the New Orleans sewers. He originally came from a Wendy's kid's meal back in 1980. I LOVED ALL DOGS GO TO HEAVEN. I was fully drinking the Don Bluth Kool-Aid back then, and I loved A.D.G.T.H. along with the Secret of NIMH, The Land Before Time, and An American Tail. What was weird was that I understood even as a child that these were NOT Disney films. These were Don Bluth films, and that seemed like a serious competitor for Disney to me back then. King Gator was one of the best and weirdest sequences in a DEEPLY WEIRD movie, and I am so crazy glad I have a figurine of him to add to the cave. 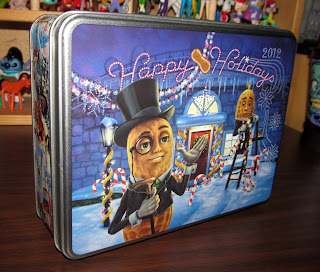 Last up, I found this Mr. Peanut Christmas tin from last Christmas as I knew I ultimately would when I debated buying it at Wal-Mart last Christmas when it was something like 15 dollars full of exotic nuts that I did not care about. 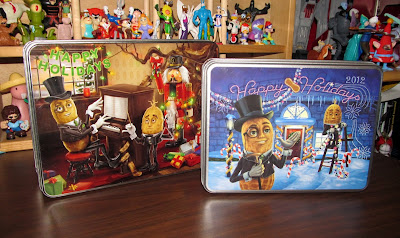 As I mentioned in my recent California Raisins post, I love the new Mr. Peanut (and dedicated a whole post to him last Christmas when I talked about both of the tins pictured above). So I don't really feel the need to gush over it... but the fact that I got it for .99 cents, saving myself something like 14 dollars or so (I can't remember how much it cost honestly) makes me pretty glad that I frequent Goodwill so much. The new Mr. Peanut hasn't done any more TV ads lately that I know of, but he's been keeping busy:

That's it for me tonight kids! I'll be back with more Geeky Goodwill Goodies soon enough though! until then, Happy Hunting!
Posted by Derek Ash at 2:18 PM