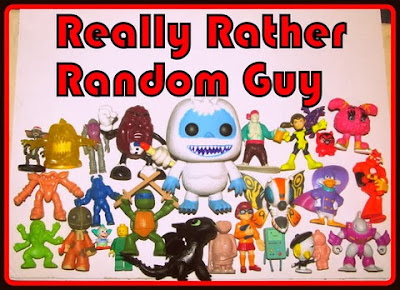 This post was originally published back on February 7th, 2014.

I've mentioned Scottie's Books on more than one occasion in the past, and almost never fail to find something fun when I go in there. A few weeks ago I stopped in and found a couple of issues of Starlog magazine for a few dollars apiece.

Back in the day I was never a fan of Starlog as I associated it too much with Fangoria which scared me so badly as a child that it made me physically ill to even see on the newsstand. That last sentence probably sounds like an exaggeration, but I assure you it was not. I was shocked when I googled it to find out that it actually only went out of print in 2009 which feels way too recent. 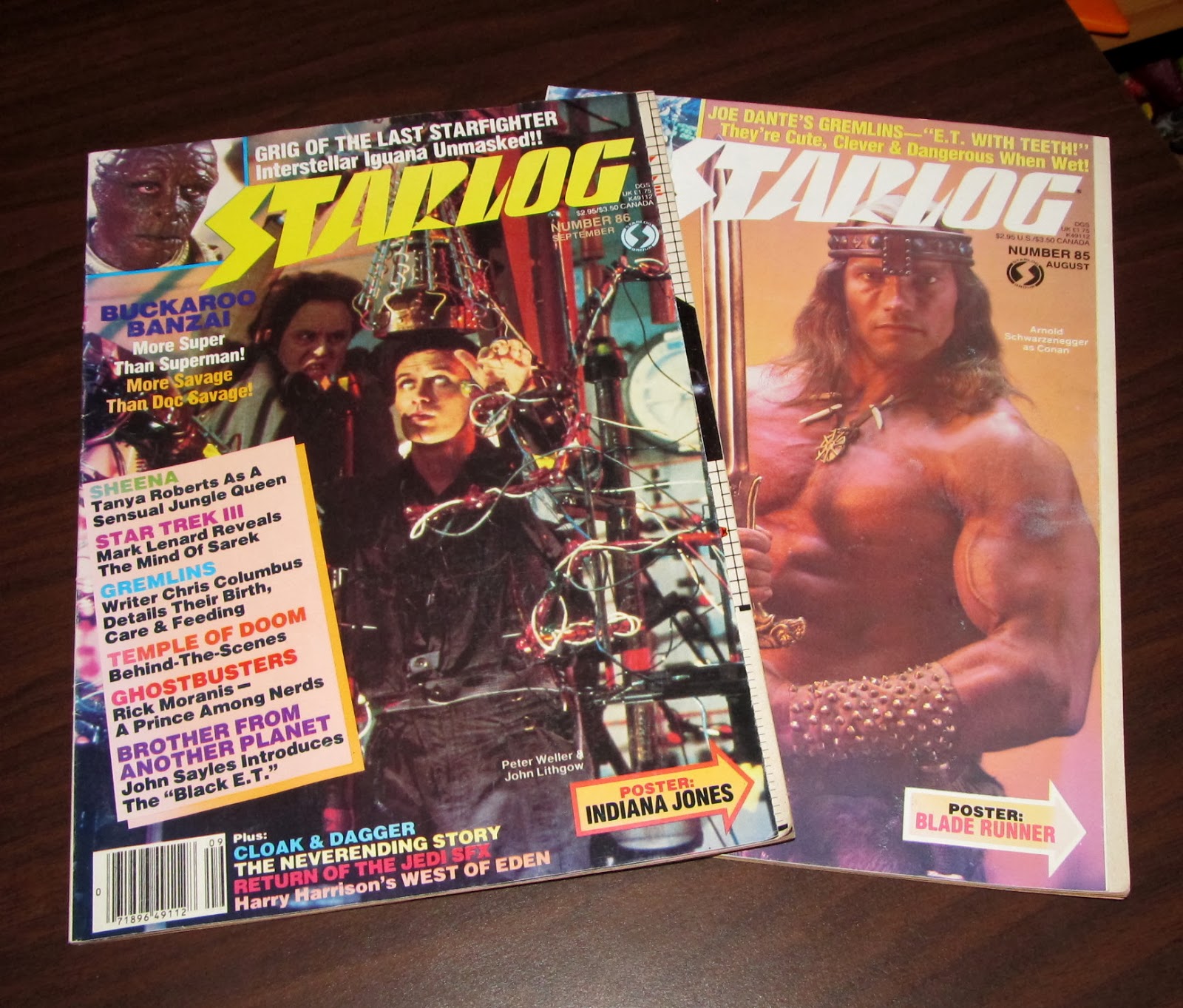 Since I normally wouldn't have been interested in Starlog in the past, I didn't even pick these up when I initially saw them, and then finally I saw the word "Gremlins" on the covers of both magazines, and that pretty much did it for me. Upon closer examination I saw features inckuding Ghostbusters, Indiana Jones, The Neverending Story, Cloak and Dagger, Muppets Take Manhatten, and the Last Starfighter. And this was all just from a cursory scan of the covers. (Completely ignoring the Buckaroo Bonzai and Conan the Destroyer photos on the covers) I didn't even open the poly-bags on these until I got them home. 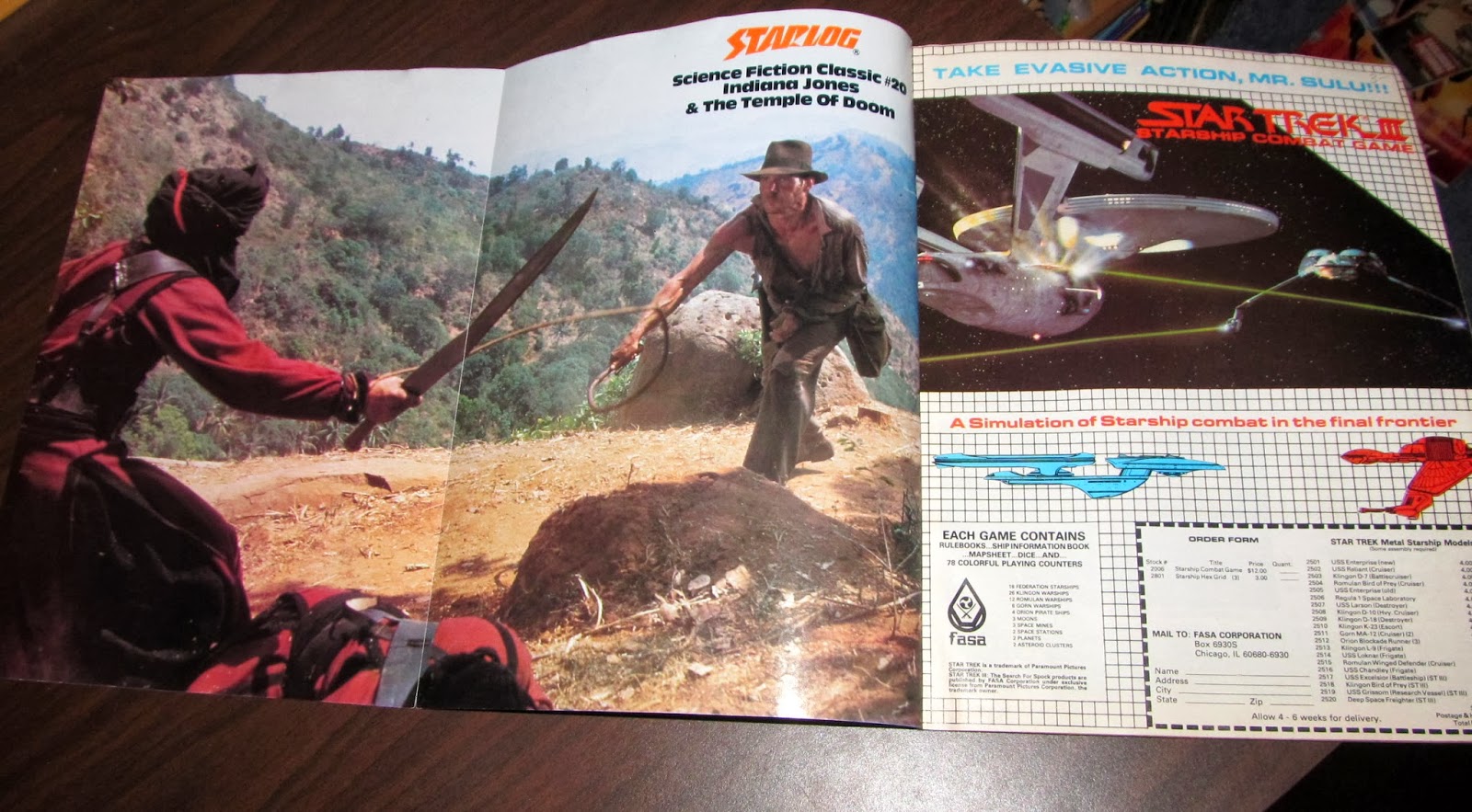 Now, I'm going about this a bit bass-ackwardsly because I'm actually featuring shots of issue #86 first (with the cover shot of Buckaroo) and then I'm going to get to #85 second. Honestly, I don't even have a particularly good reason for that. But look at the fold out poster in the front of issue #86! Indiana Jones and the Temple of Doom! or, as the kids nowadays are wont to call it, "STARLOG Science Fiction Classic #20". And check out the facing-page ad! A Star Trek III tabletop paper-and-dice game that is "a simulation of Starship combat in the final frontier" which I highly doubt could possibly be as intense as they are hoping you'll think it is. 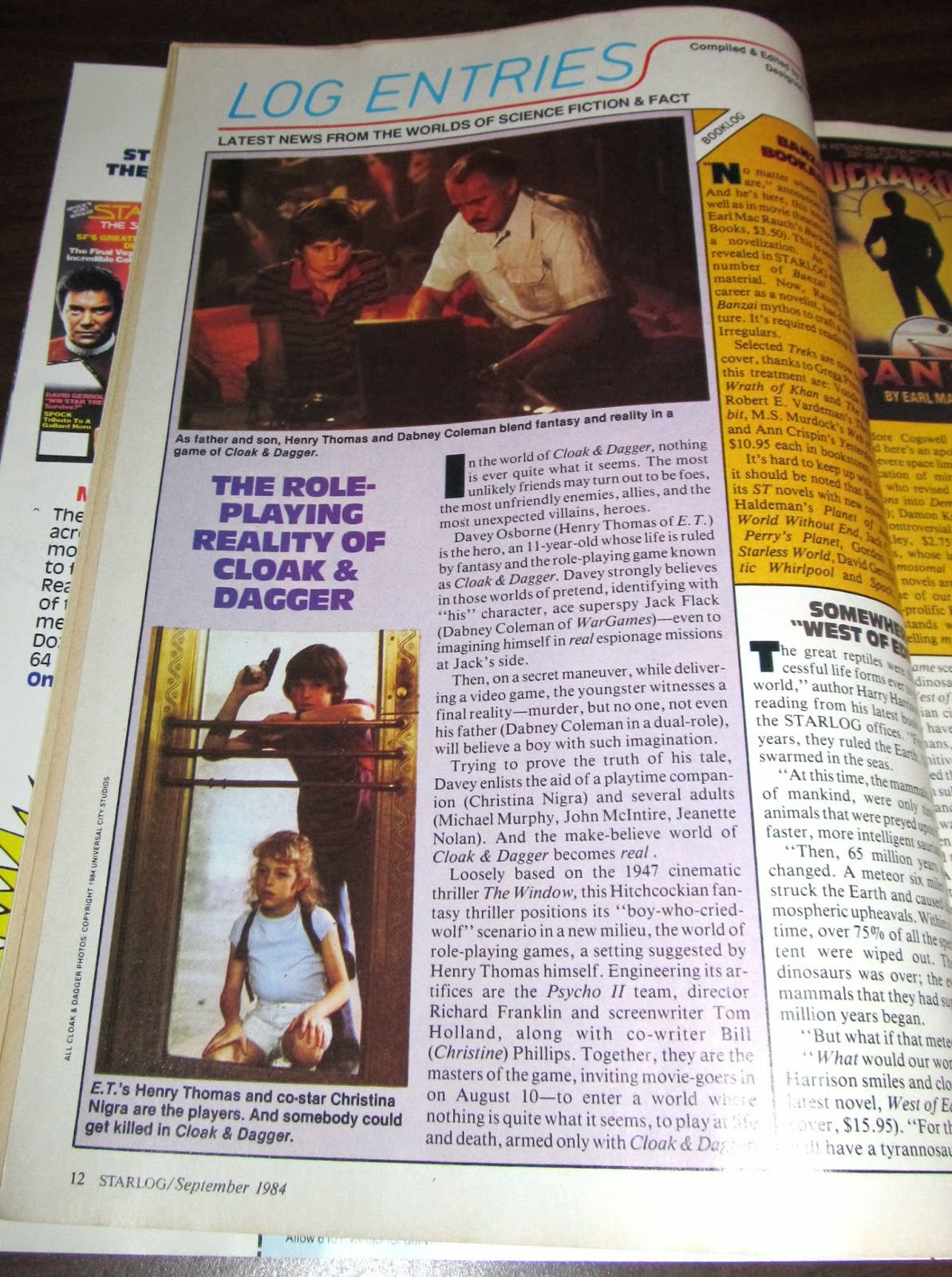 You guys... YOU GUYS. A Cloak & Dagger article! Now admittedly, it's a pretty light piece, being a plot synopsis, list of actors in the film, and a mention of the inspirations and creative team behind the movie... but YOU GUYS. Once upon a time, people could just go out and buy magazines with articles about Cloak & Dagger in them??? I want to go to there. 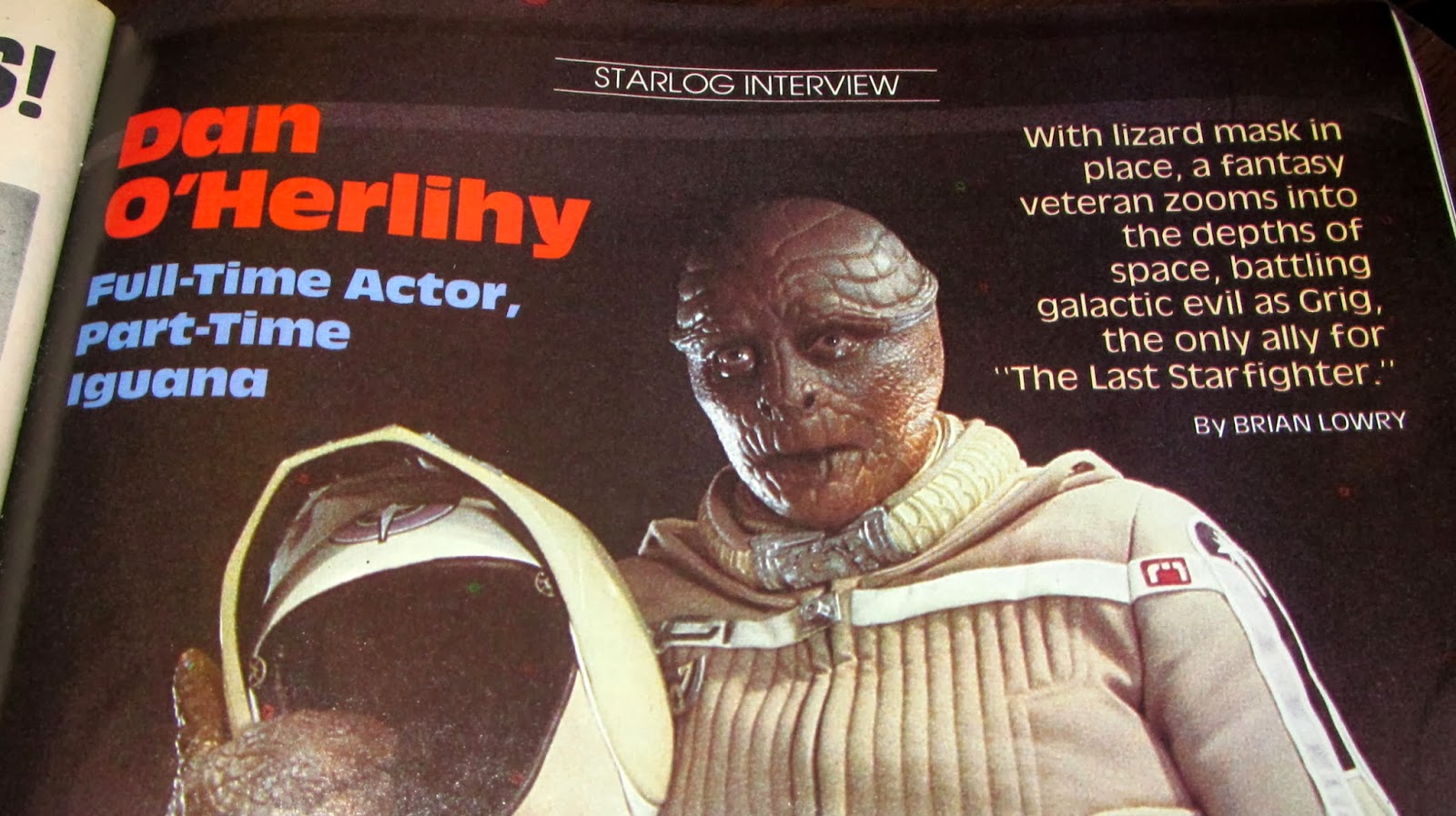 Then this. "Dan O'Herlihy: Full-time actor, part-time iguana." Actually, the other issue I picked up had a Starfighter article in it as well, but in a crushing moment of disappointment I realized that the issue had somehow been printed without a page #59/60! It was a pretty in-depth article, too! In fact, page 59 was the second half of an article about Robert Zemeckis trying to turn "The Shadow" into a feature film... in 1984!!! Instead we got the Alec Baldwin version (which I am actually a fan of) 10 years later. But I can't help but wonder... Anyway... Yeah... Dan O'Herlihy. Moving on. 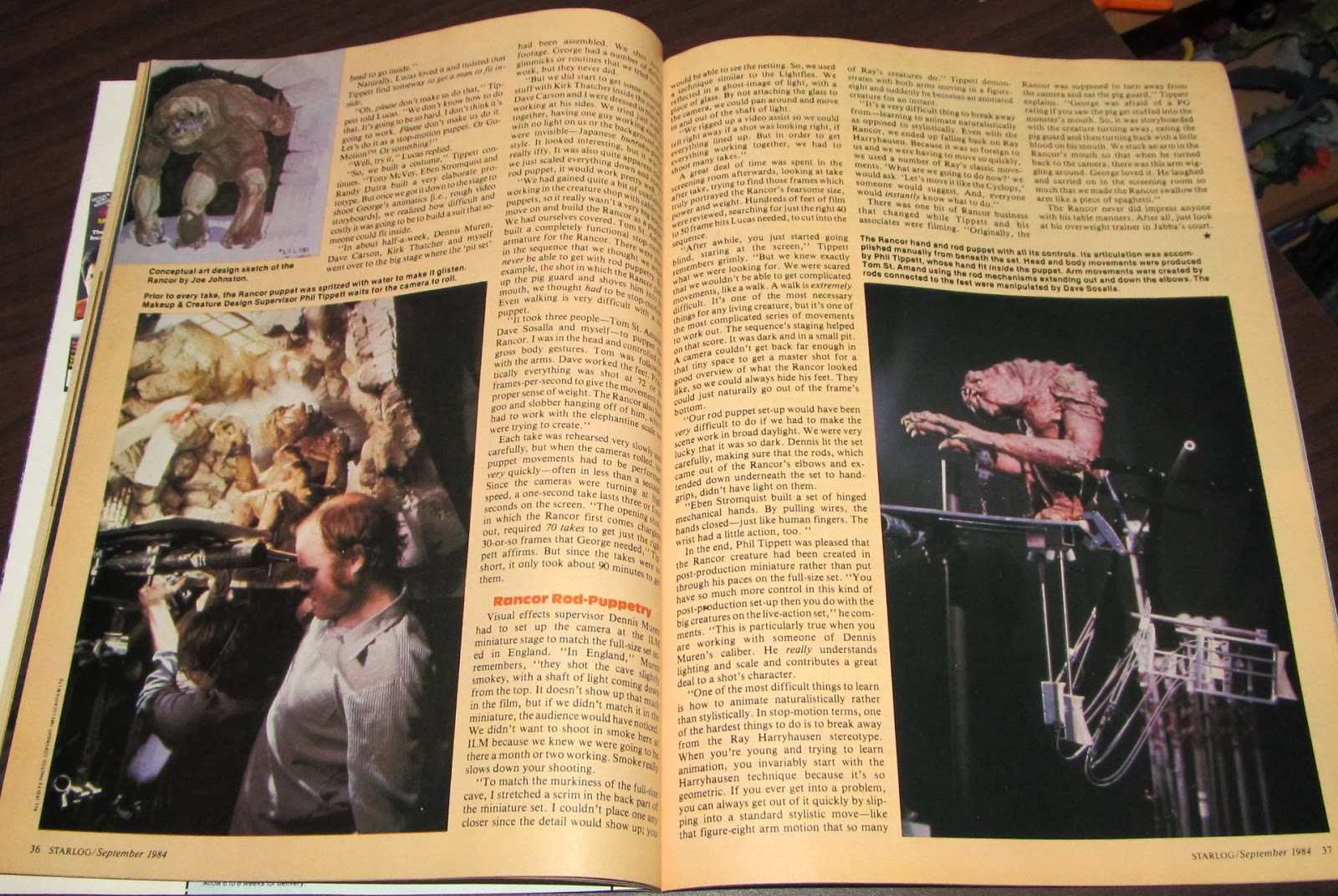 There was a pretty great feature on the special effects behind the Rancor... This stuff has probably been archived and bandied about by die-hard-hardcore Star Wars fans for decades now, but did that awesome concept art up in the top left corner! 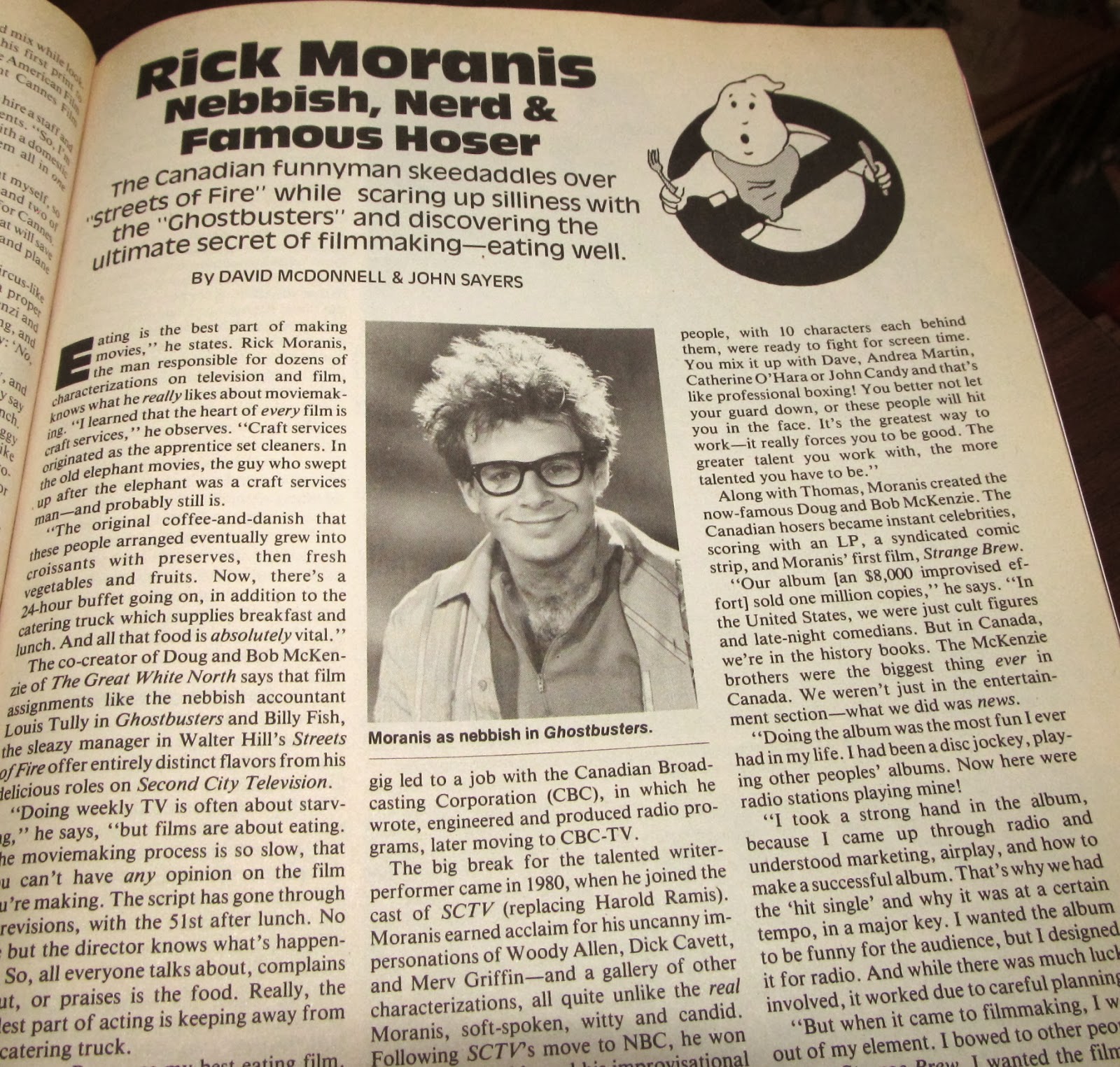 An interview/focus piece on "nebbish, ner, & famous hoser" Rick Moranis! I love the caption under his photo: "Moranis as nebbish in Ghostbusters". Which pretty much sums it in the weirdest way possible. I like how the photo also seems to be Moranis in a very out-of-character moment. No trace of Tully in there at all, even though he's obviously in costume. 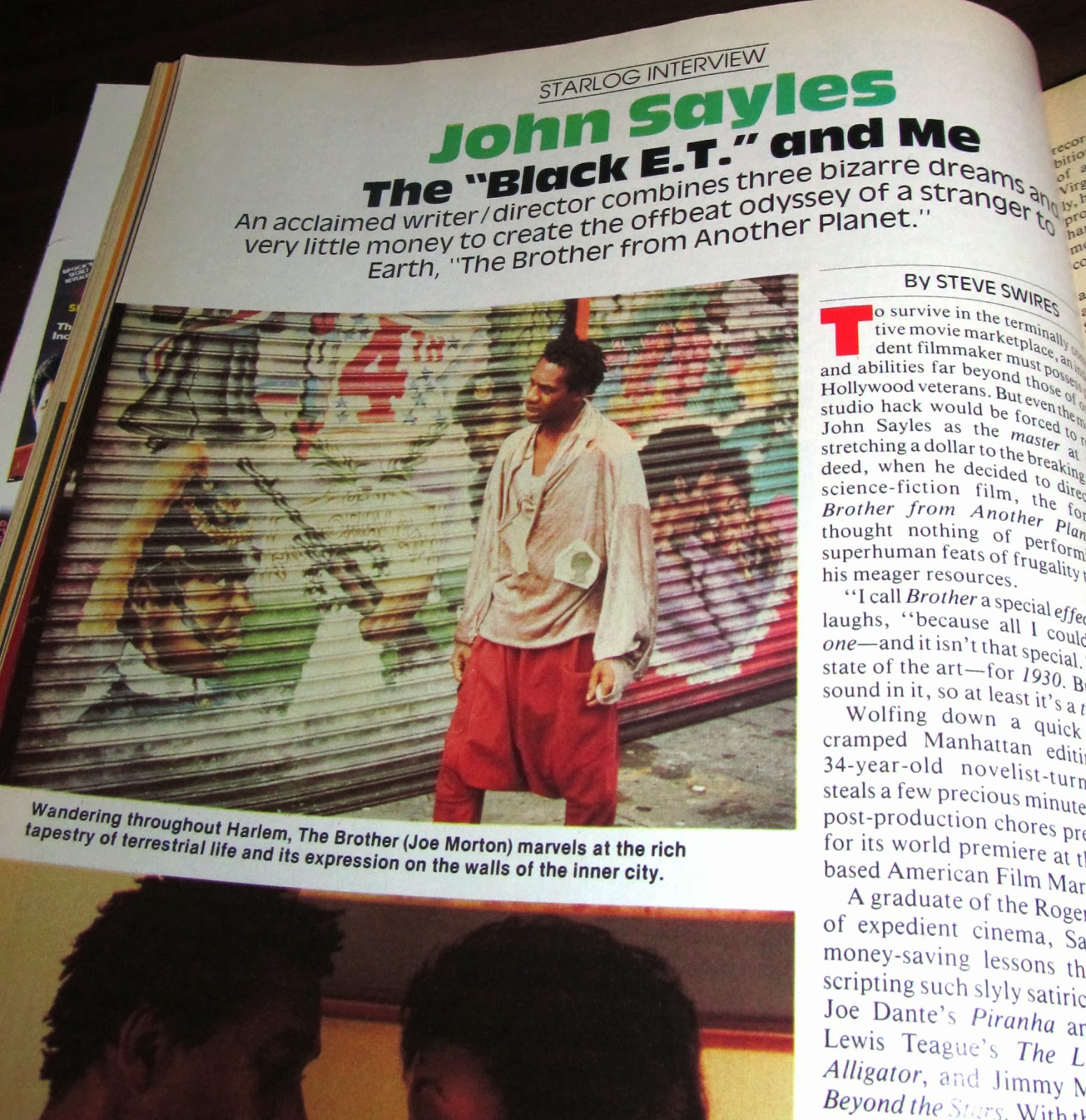 And article about "The Brother from Another Planet" Someone honestly tell me if this was worth watching. I think it's on Netflix right now. That's... all I've got to say about this. 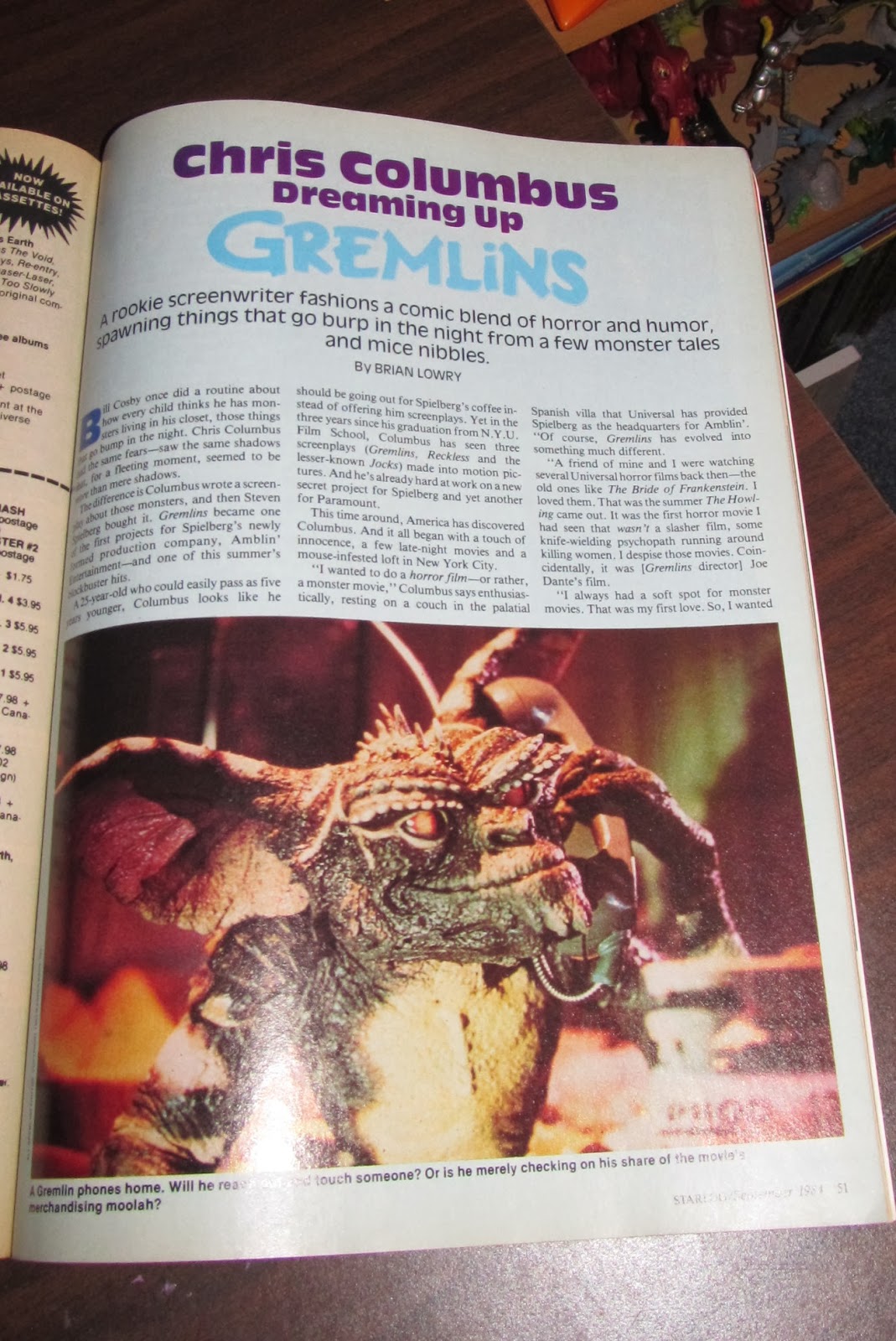 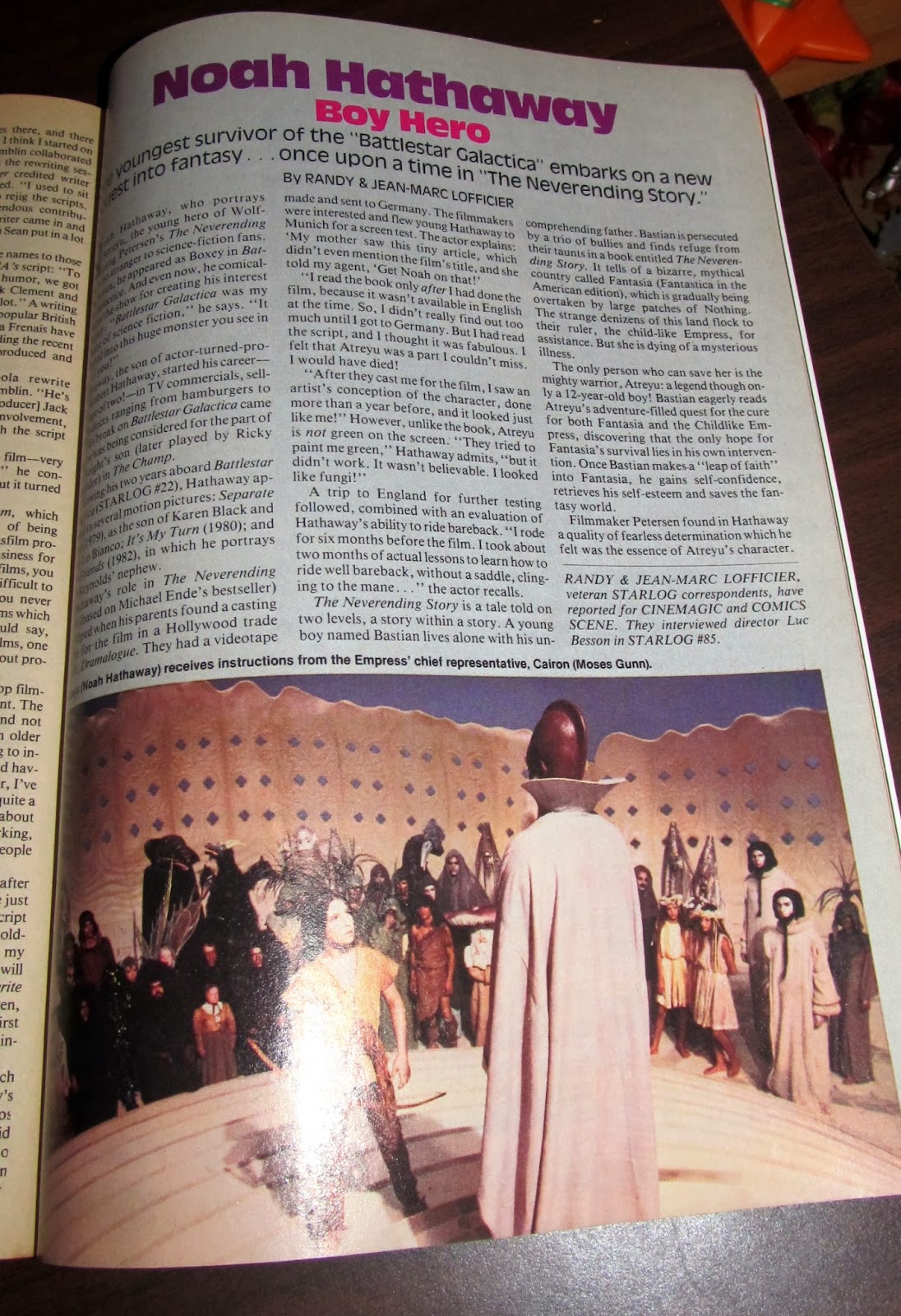 Aaand an article on the Neverending story. I can rest in peace now. 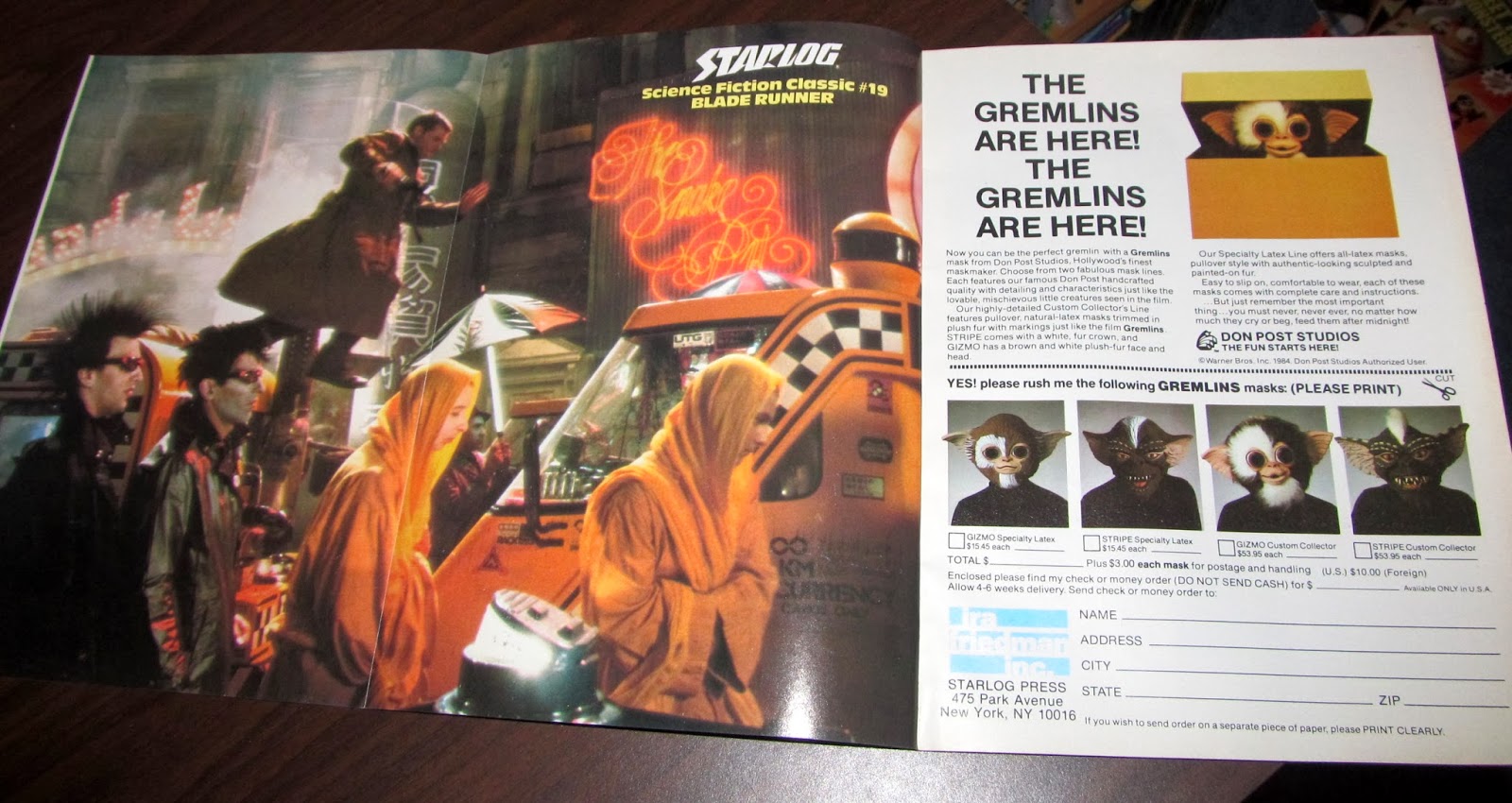 Okay, so onto issue #85 (With Conan on the cover and tragically missing a VITAL page...) here we have a very nice gatefold Bladerunner poster or as it is known more commonly, "STARLOG Science Fiction Classic #19". 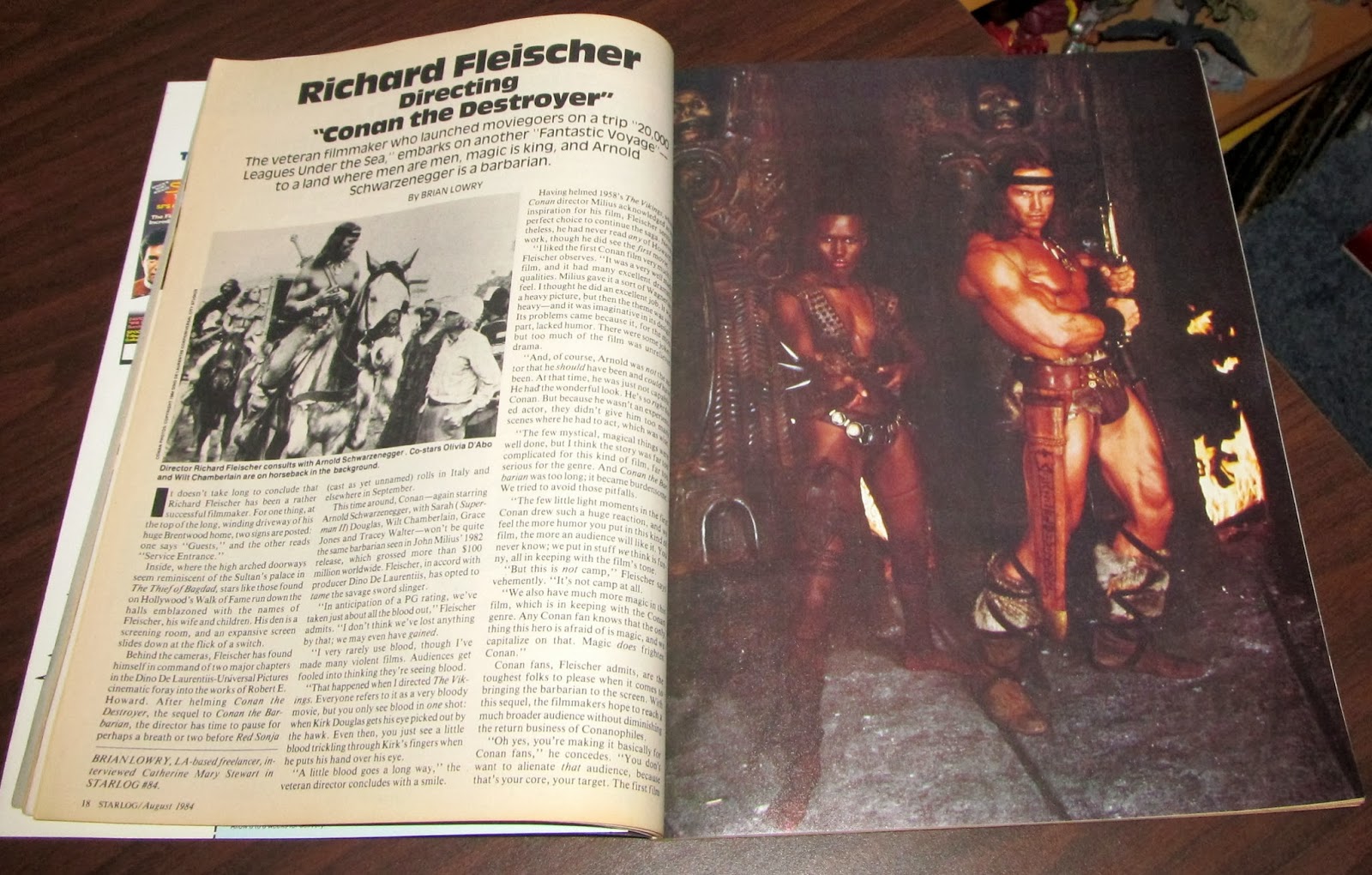 Not surprisingly, there was a big Conan the Destroyer article. With lots of greasy half-naked people flex-posing. This didn't really do a lot for me (also, I hope, not surprisingly). 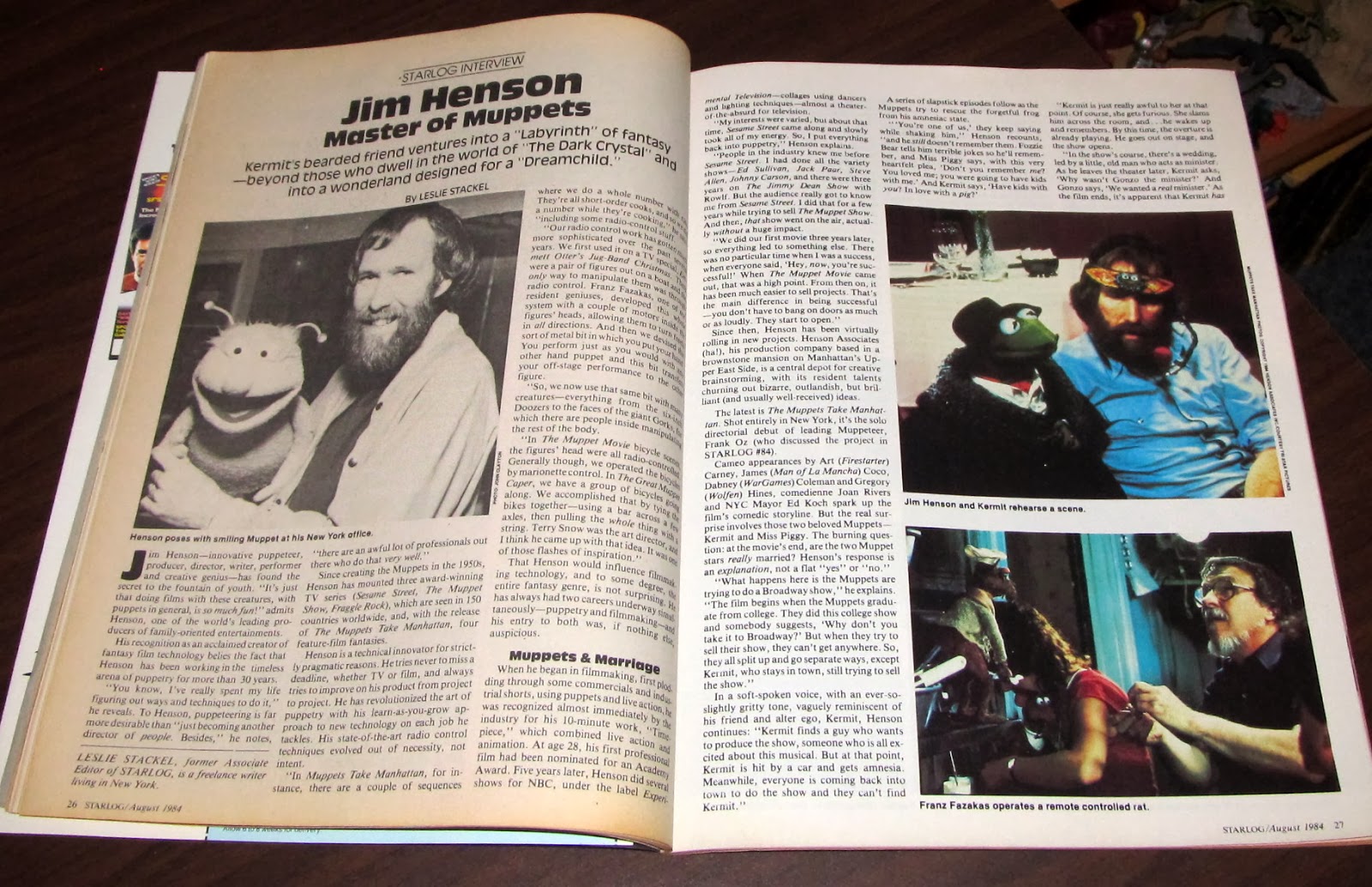 Aaand then I pooped my pants. In this article, Jim Henson is talking about a little film called "Labyrinth" which they are currently developing with Brian Froud. None of the cast members have been cast at this time. It boggles (Hoggle!!!) the mind to think back on a time when Labyrinth was still just... just... an IDEA. 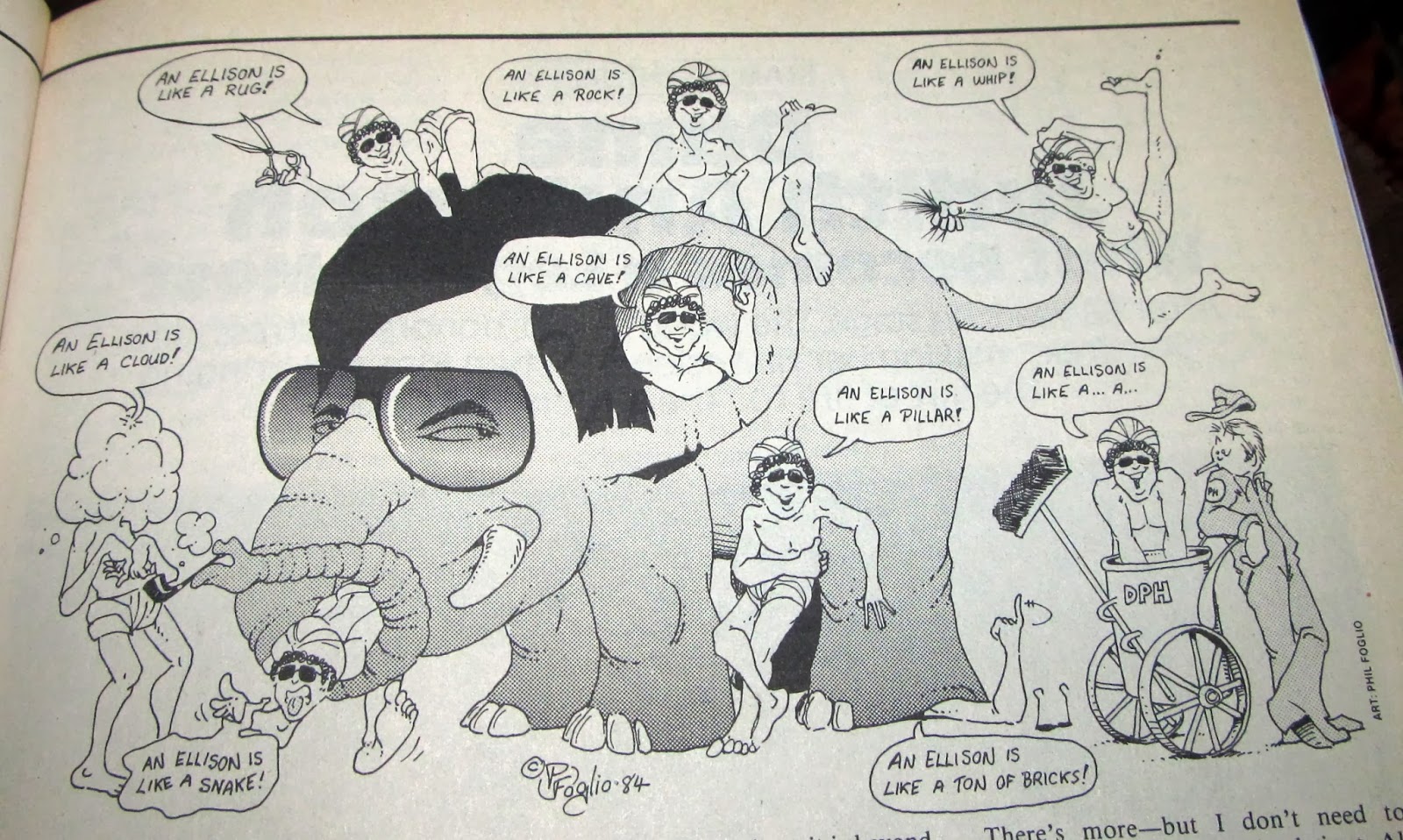 There was a Harlan Ellison article that would not have made sense to me before I started watching Scooby-Doo: Mystery Incorporated with my boys. As Harlan Ellison has just always looked like this to me: 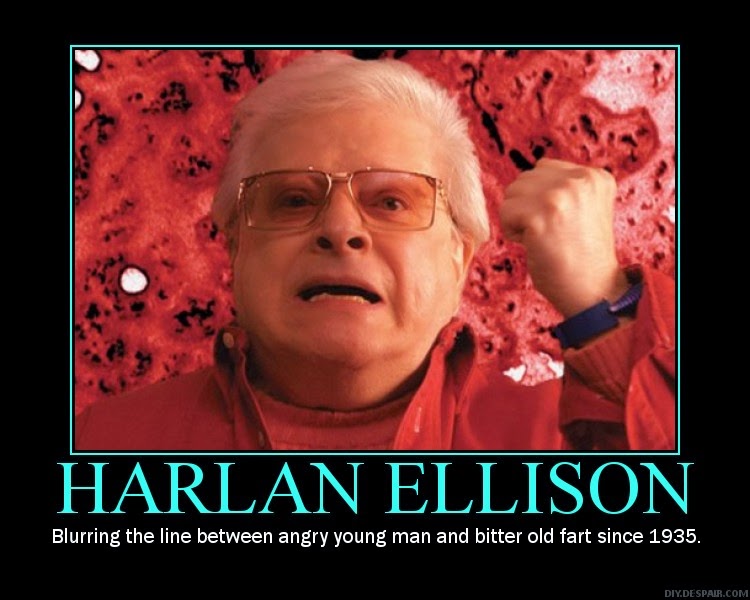 
The article is all about Harlan Ellison's effect on the sci-fi landscape, not just as an author, but as an editor, as a personality, as an educator, and as a bona fide creative genius celebrity madman. It was a nice read. 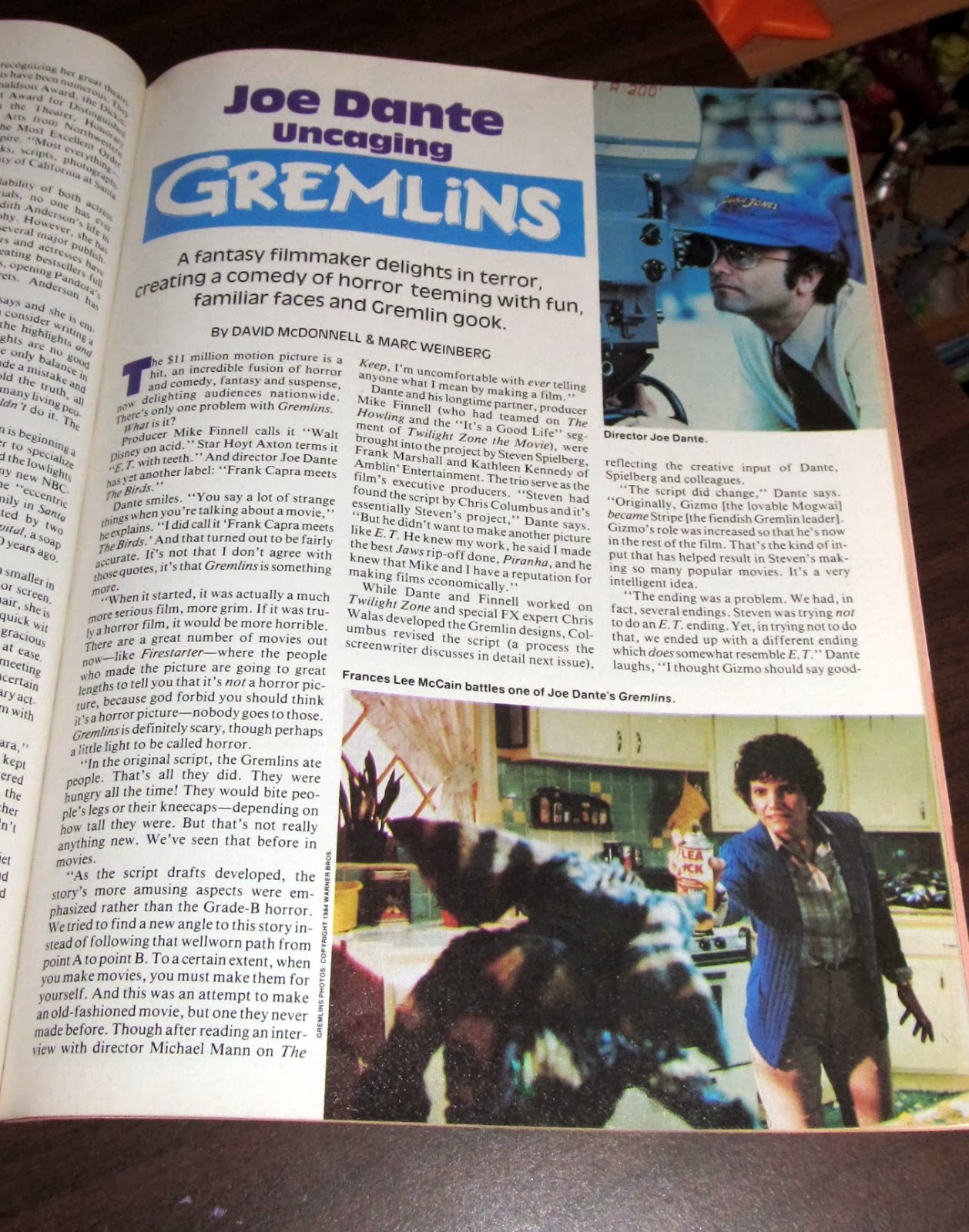 MORE Gremlins!!! This time focusing on Joe Dante instead of Chris Columbus. 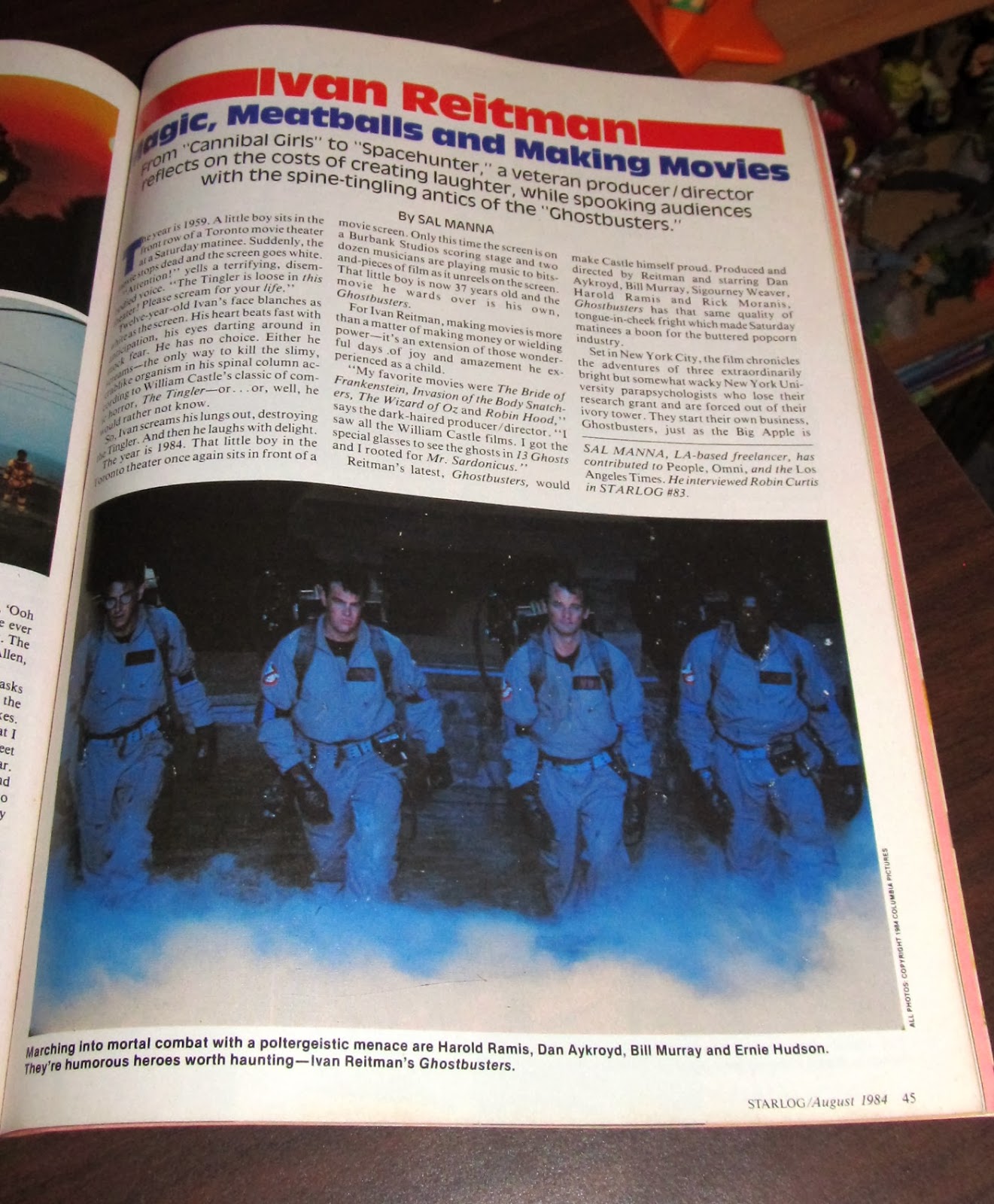 And to wrap it all up, a nice Ivan Reitman piece with lots of focus on Ghostbusters. Phew!

All in all, I never knew what a great treasure trove of old pop-culture goodness a couple old issues of Starlog could be... but I will definitely be keeping my eyes peeled for more copies in the wild from now on!!!

That's it for tonight kids, but I'll be randomly popping up on here in the future, so keep your peepers peeled!